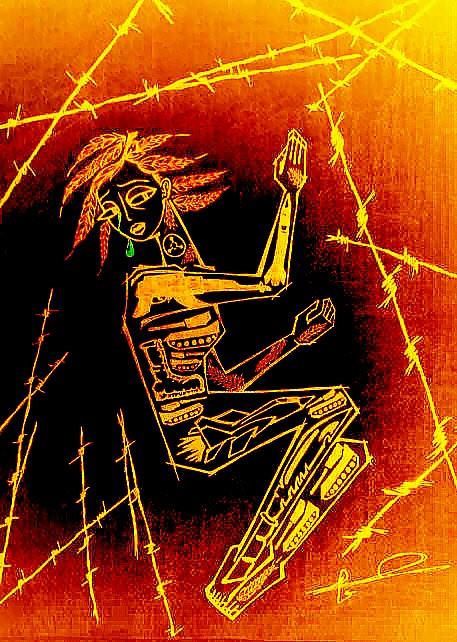 On a very normal day, during lunch with a friend in Turkey, away from the pounding of bombs and death, and close to suffocation with guilt at being away from my city, enjoying luxuries like electricity and communications services while Aleppo is dying, I—being as much of a social media addict as the next person—opened my Facebook page. There, I  found a message on my wall from a friend with close ties to the rebels. It read: “Marcell, The security checkpoint at Sabaa Bahrat is no more. It was destroyed in today’s bombing. I know this means a lot to you. I hope the air force [building] is next. I might then feel something close to what you are feeling now.”

This friend really knows me. He knows how I hate having my name spelt with the letter “A” in Arabic, and spells it correctly. He knows that this checkpoint, in particular, means a lot to me personally, and not only from a revolution perspective. He was present at the funeral of my mother, who was killed in cold blood at this checkpoint by security forces. He also knew that I would understand his pain when he informed me about the notorious air force building, where protestors have been tortured and killed. And he knew why I understood his hopes that this building was bombed.

For a moment, the news about the checkpoint came as a shock. It signifies the absolute end of those who ended my life, and I didn’t fully understand exactly what I was feeling. What I felt, in fact, was an infinite numbness.

Let me share with you some of the ideals I on which I was brought up on in our household. As a human being from a conservative Christian family, I was raised to believe that love alone could erase the pain of mankind in a world overtaken by hate. I believed that all lives—regardless of whom they belonged to—were absolutely sacred. This is why I stood against abortion, against war, against capital punishment.

Burdened with my belief that forgiveness was power, and that Christ in whom I believed, had called upon us to forgive those who have wronged us, the true test of my belief was forgiving the people at that checkpoint, my new enemies, those who killed my mother. And I failed. I went through a phase where I became obsessed with my mother’s killers. Who were they? What do they do? From which families do they come? To which sect do they belong? I was able to bribe to someone who was able to fill me in with the information. I kept that piece of paper for a long time, and then destroyed it when I became powerful enough.

I was in a position to hand over their names to my armed friends on the Free Syria Army, who could then circulate the information and ensure the killers were punished. But I destroyed it because I could not take the decision for them to be killed, or to even participate in a decision of this type. Having this sort of power really frightens me. Having this ability to be both victim and judge is a privilege, and also a curse, and that truly exceeds my abilities.

Still, almost every week I would seek them out. I would stand and study them from afar. Unfortunately, they were people just like us. They smiled and they got tired. They exchanged jokes and got angry. They worked in two shifts, and I wondered who was working the shift on which my mother was killed.

They drink tea the way I like it, sweet and light. One of them had a toddler son who visited him at the checkpoint with a veiled woman whose features I couldn’t make out. Did his wife know that he had shot my mother? Or, to be more precise, that he had killed her? Later on, I realised that I couldn’t remember my mother without remembering them as well. The features of the killers slowly started to appear where her smile and the strands of her hair had been. The voice of vengeance in me was greater than anything she had ever taught me, higher even than her laugh. On that day I took the decision that I would stop thinking about them.

I no longer bear a grudge against them, but I cannot forgive them. I am stuck in a space between pain, vengeance and forgiveness. I cannot—although it could be true—acknowledge that they too, might be victims of the Assad regime, which had turned them into murderers. There is a court case between us in the Syrian courts which I had hoped I would drop after the fall of the Assad regime as a form of forgiveness, as I believe that is part of the solution for Syria to become peaceful again.

So, the news that the checkpoint was bombed by the Islamic Front a few days ago was a slap in the face. Am I happy that they have died? Have I really changed so much that I can derive happiness from the death of others? Have I lost the privilege of being able one day to forgive them? Has the sacredness of life become less sacred for me? Has the war completely infested my psyche?

I don’t know what my feelings are, exactly, but at this moment I fully understand the cry of all the victims who are calling for revenge. And I understand how everything loses value when you deal with death on a daily basis. I know how learning to adapt gives you greater reverence for death than for life. In our days, which have all become similar to each other, death has become the norm and life the exception.

The Islamic Front’s statement says that according to preliminary information, more than 50 of Al Assad’s soldiers and thugs were killed in the operation. I wonder if my mother’s killers were among the 50. Or were those who died innocent people who happened to be at the wrong place at the wrong time? I don’t want revenge, but between my sadness over innocent people and friends, I don’t have the ability to feel sad for a checkpoint, or for state institutions or for murderers. I am still trying to feel surprised at feeling sadness over the loss of innocents. I am unable to feel sadness for murderers who are killed, despite strongly believing that peace is the solution for this world.

This year, for my birthday, I received a small pistol from a friend who was worried about me, vulnerable in a country where almost everyone is now armed. Who would have thought that a weapon could become a symbol of love? But I am saddened that I have become a victim twice over. The first time was when I lost my mother; the second when I lost my status as a victim. The murderer inside me had grown, and I started feeling happy about the killing of others.

My ability to survive depends on the death of others. This is the idea that I try to live with and use as an excuse: “For me to survive, he has to die.” And this is how the murderous regime will ultimately win, regardless of what political change awaits Syria. The regime has succeeded in turning us all into murderers. I feel sad for our children, as they will have to live with us after we have all become either killing machines, or creatures who gloat at murder of others.