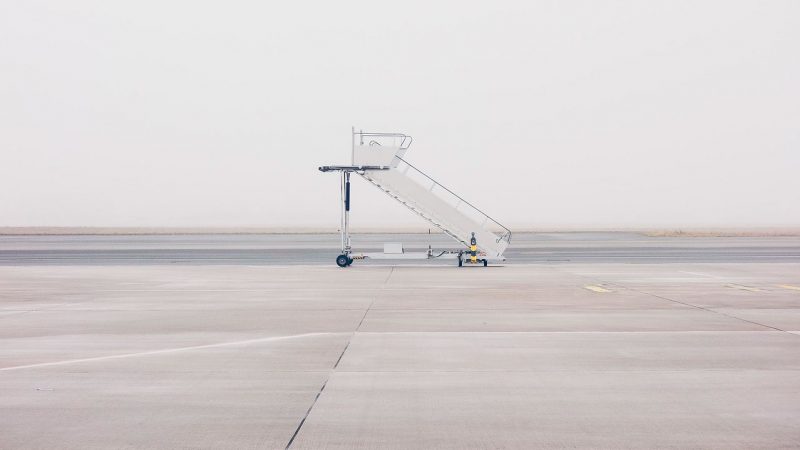 I am lucky to have a Syrian passport. You see, if it weren’t for this passport, random selection wouldn’t have chosen me, randomly and coincidentally, for investigation in all airports I’ve ever been through.

Imagine that happening! It would be as if my time actually mattered. If that were the case I would definitely have failed to notice those coming from countries that are worth less under the Universal Declaration of Human Rights.

If it weren’t for my Syrian passport I would never have heard that extremely polite phrase: “Would you please wait on the side by the wall, Miss?”, and I would not have remembered my childhood school punishments.

What is this world punishing us for? Don’t you think that all borders should be opened specifically for us, Syrians, with a word of apology?

The real terrorism flies to you in private jets, and into private airports, after killing us silently, and occupies the pages of your newspapers and gets your media to discuss the elegance of his wife—the “Desert Rose”.If it weren’t for my Syrian passport I wouldn’t have noticed how we, the suspects, are led with extreme politeness to defend our innocence and to denounce terrorism; we, who have been more targeted by terrorism than any of those investigating us about it.

Your politeness, Sir, kills me more than your discrimination. “Would you please….” “We’re sorry to keep you…” “We’re sorry you have to go through this….” They sound like the clichés a man offers a woman he doesn’t love. “It’s not you, it’s me…” An over-politeness to sugarcoat a bitter truth. To make one feel good about oneself. You send us to be investigated on no charge but our identities, but you do it with extreme politeness.

I sit there and wait with the rest. I take out an Arabic book by Ibrahim Nasrallah, a Palestinian writer who talks about resistance and love. I remember when I was an activist fighting for freedom and democracy, going out on protests and running for shelter, and writing. I look at the book in my hand. Now my biggest act of resistance is holding an Arabic book in an airport.

Excuse me, Sir, if I made reference to how problematic your interrogations of Syrians are. You see, some of us have experienced the unimaginable during interrogations, so we aren’t intimidated by something this polite. Others are so afraid of anyone in uniform that they confess to things they don’t even know. So what “truth” is it that you are trying to get out of us?

I also ask your pardon, for I didn’t mean to say “No” with such pride when you asked me to unlock my mobile. You see, this request echoes deeply in our collective conscience as Syrians. This request takes me back to the checkpoints in my country, where saying no to such a request could simply get you killed. I said “No” with pride because I wanted to inhale some of your democracy.

Do you understand the meaning of half a million of my own people dying in search of a democracy? What it means to be able to say no without getting killed?

You ask me about my purpose for being in your country? I don’t know. I came to talk about death. They tell me I’m so good at talking about death that some of you even applaud me when I finish. I have seen so many human remains in Aleppo and it seems I am good in marketing that in English.

That’s what I came here to do. To look for allies I can convince that we deserve less death, and that maybe, just maybe, bombing a school is a shame for all humanity.

Do I look angry to you? I apologize! I haven’t yet mastered your manners. Appearing angry makes one suspicious, I know, and you know how emotional we are. You see, we haven’t yet learnt how to be less angry while all the planes in the world are helping our government bomb us day and night. I will try to look cheerful and happy in the airport, but allow me to give you a small tip: if you see a cheerful and happy Syrian in an airport, it’s then you should really be suspicious.

Do I appear fidgety to you? Maybe it is because I don’t understand how someone would ever answer “Yes” to the question: “Are you a member of a secret banned organization?”

No! No! All the secret peaceful groups I have ever been a member of were destroyed by our regime, their members displaced and their youth killed under torture. Have I ever used guns? I once suggested to a guy I liked to go shooting to release some anger, but he advised that we better avoid that, because it wouldn’t look good on our official papers as Syrians. But I only suggested that because I really liked the guy, and you know how love makes us do foolish things. But I have no intention of going near a weapon in my life. No Sir, I don’t use weapons, I hate weapons, even water guns will not find their way into my house.

Despite all that, I am lucky to have a Syrian passport, as thousands are deprived a passport by virtue of a political decision. Millions of others, who are not as good in marketing death as we are, or whose stories are less exciting to the audience, don’t get visas to travel, so they come to you by sea. Some of them die just to cross to you, so what’s four hours in the waiting area compared to that?

I am lucky to have my Syrian passport. Imagine—after all that I have been through, I still have nightmares where I lose my passport and wake up terrified.

I have an OCD habit of checking my passport every five minutes when I’m travelling. As if I lose it, I don’t know if any of those concerned international entities would help me get another travel document, in the event that the teenager Bashar Al-Asaad refused to consider us citizens and punish us for escaping the leash by denying us passports.

Nor do I want to add to the refugee crisis in your countries, God forbid.

I am lucky to have my passport. Could you please return it to me?